The Emporia smart plug was straight forward to set up and get connected to wifi. Instructions were clear and easy to understand. The functionality of the app is very good and offers great scheduling options. I currently use it to control a dehumidifier in my basement to limit off cycle current drain. Currently run it on 3 two hour schedules to optimize efficiency and control costs. So far I like it a lot and for the value, it is a great little device with super data logging capabilities.

They did everything that they were designed to do.

I installed a three speed exhaust fan in my garage and was a bit surprised to see the Vue's inductive pickup used for the garage reported the same number of watts regardless of the speed.With my old kill-a-watt I verified my guess that the issue was a poor power factor in the speed control - the current and voltage are out-of-phase, so while the watts drawn did change, the current draw did not. The inductive pickups can't measure that.I added one of these plugs and was very pleased to see the wattage was very close to the kill-a-watt measurements.Good job, Emporia.Possible ding: In a thunderstorm one of my plugs wedged and shutoff my sump pump. (No damage.) I swapped plugs there and am using the failed plug elsewhere (it recovered after a power cycle). So far no other events, not worth knocking off a partial star.I knocked off a star for installation, as firmware needed an update, and a star for ease of use, as all data goes to Emporia's cloud and there's no documented way to capture a copy locally on my Linux system.

Easy to use and work perfecto.

R
Ryan P
Pays for itself! Learn your home!

Pros: [+] The app & devices are easy to setup (Android phone). [+] Customer support is amazing! They even reply to feature request suggestions [+] I can tell you how much each device is using in the home [+] I have decreased my energy bill by adjusting settings/usage of devicesCons: [-] Now that I know how much my family 'wastes' (oblivious to them), the stereotypical 'dad' adjusting lights & thermostats is in full force, but for a wider variety of electronics :)Things I learned (as an example of things YOU could learn, too!)* The TV in the 'OFF' mode uses 30w (!) of energy because it waits for voice input to turn it on. I put it into Power Saving mode, and now after 10 minutes it drops to 5W. All those years of 'turning off the TV to save money', and it was only dropping from 65w to 30w* The Air Fryer uses obscene amounts of energy, but only 'momentarily through the day. And, if you pull out the drawer to 'shake' the food, it bumps up the wattage significantly when you put the drawer back in* The Washer uses a ton of energy in 'spin' cycle. (But, in theory saves over having the dryer run longer. I plan to get the Vue 2 for the dryer and other circuit breaker monitoring.)* The electric heating blanket? I thought was a big deal... it uses only a minor amount* Electric 'Greenworks' Lawn Mower: It only costs me $4 to mow my grass a *month*. And, I need to unplug the charger between mowing because it draws a lot of energy when 'idle'* The nightlights & LEDs in the hallway cost practically $0. But the 'shop light' LEDs use 36w* The audio amplifier uses 24W (24/7) regardless of usage. I removed it because it wasn't THAT valuable.* The fridge/freezer in the garage use 40% on warmer days. I'll move them inside the house.* Laptops & Desktop PCs are highly variable. But, the Desktop sitting 'idle' uses 85-175W doing "nothing". I used to let the PC 'run' so it was always available. Now, I set it to sleep sooner.* The fan to circulate air draws only a little bit of energy, even on 'high' speed. I can set my thermostat higher (in the summer) and use the fan on high for savings.* The 'towel warmer' for the baby/kids I thought would be bank-breaking. It's not! It uses much less than I expected. Now I don't mind running it 2 cycles in a row if I need to. (Yes, I'll pay 2 pennies a day for happier kids.)* The Internet router/FiOS ONT use only 12W each, even when streaming or high data usage* Replacing CFLs with LED lights can make a sizable difference. (I assumed replacing incandescent was 'enough', but going LED everywhere dropped costs a lot further.)========Sidenote: There is no PC/Mac app. It's only for iOS/Android. However, you can install (free) BlueStacks (an Android emulator) on your PC/Mac, and run the Emporia app. It's a roundabout way that works to view data on your PC.========In Summary: You'll pay for the device by learning how much energy your appliances REALLY do suck up. You'll learn patterns of usage, how 'variable' the devices operate (Washing Machine, Air Fryer, TV) per second/minute/hour/day. Try them! Learn, and save! 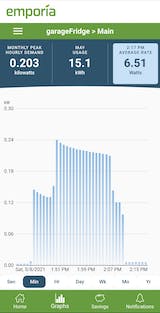 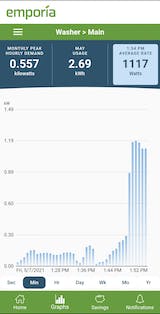 9 minutes ago from Boise, ID.
Emma purchased a

17 minutes ago from Phoenix, AZ.
Jackson purchased a

6 minutes ago from Austin, TX.
Aiden purchased a

10 minutes ago from Los Angeles, CA.
Ava purchased a

17 minutes ago from Cheyenne, WY.
Liam purchased a

14 minutes ago from Atlanta, GA.
Mia purchased a

16 minutes ago from Portland, ME.
Lucas purchased a

13 minutes ago from Denver, CO.
Isabella purchased a

10 minutes ago from Hartford, CT.
Noah purchased a

19 minutes ago from Topeka, KS.
Zoe purchased a

6 minutes ago from Boston, MA.
Mason purchased a

15 minutes ago from St. Paul, MN.
Lily purchased a

2 minutes ago from San Diego, CA.
Ethan purchased a

7 minutes ago from Harrisburg, PA.
Caden purchased a

14 minutes ago from Albany, NY.
Logan purchased a

5 minutes ago from Santa Maria, CA.
Emily purchased a

12 minutes ago from Portland, OR.
Bryan purchased a

18 minutes ago from Boise, ID.
Nicholas purchased a

16 minutes ago from Phoenix, AZ.