Ordered the 4 pack and installed all 4. Easy to install and set up with the smart life app. There is a problem with one switch, it controls the light at the switch and also works with the app, but the indicating light never turns off and never changes state on the app. (Always shows off) I have left an email requesting technical support and tried calling with no response as of yet. Reading through others review this seems to have happened to others. Presently waiting to here back from technical support. Will update if a resolution develops.Update Heard back from technical support and indicated that I have a defective switch and needs to be replaced. Waiting now for the replacement.Final Update Support response has been very good and replacement has been shipped, have upgraded the rating to 5.

Installation was easy as long as you can figure out which wire goes where. Im in an old house so all the wires were black, but once I figured out which goes where, I was able to get it working perfectly. This is a 3 way switch so there are 2 traveler wires. If you switch them then you can instantly tell since the light switch won't work properly. The switch frame is larger than others that I bought but it make it look much nicer and more premium. Connection to wifi has been flawless and works well for automating my hallway lights from both sides! Also I use google home so it took a couple minutes but it combines the two switches into 1 so that they dont cancel each other out when you want to turn it on. 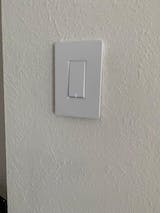 I have multiple Treatlife switches and lights, this 3 way switch which is the one on the right in the picture works perfect like the rest. Never had any issues. Extremely easy to install and works flawlessly! Love the ability to set to a schedule which itâ€™s being used for my pool lights. Many smart features as well. I have it integrated with my Alexa and my google home and works great! Canâ€™t beat the quality and price for these products! Keep up the great work Treatlife. I will continue to purchase more. 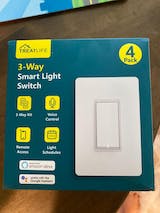 B
B. Sanders
Easy app and Alexa setup. Not a hard DIY install.

Fairly easy to install. First one has a learning curve but the others were simple. I recommend a multimeter to help determine which wires are hot and which are traveler. Switch is bulky, and I did not try to put more than one in the same game. YMMV.App setup was easy on iOS. I had several other devices already using the Smartlife app. These switches were discovered in EZ Mode in about 3-4 â€œclicksâ€ (no manual setup needed). You do need to have a 2.4 GHz WiFi, because it wonâ€™t communicate over 5 GHz.Alexa integration is easy. With the Smartlife skill already added to my account and signed in, the switches were added automatically by Alexa. I didnâ€™t have to do anything, and I was able to control the switches via voice.There is no motion detection from what I can tell, so I am not sure why that shows as a feature.

S
Schlemazl Beerbaum
Awesome product. Simplified my life at a fraction of the cost of big brand Name manufacturers.

Great product overall for when you just need a regular switch and not a dimmer. Super easy integration with Alexa. Iâ€™ve created routines for it based on the time of day and sunrise - sunset and now I hardly ever need to touch the light switches. The light is always on in the right places around the house at the right time of the day or night. The price cannot be beat either.

11 minutes ago from Portland, OR.
Madison purchased a

3 minutes ago from Boise, ID.
Emma purchased a

4 minutes ago from Phoenix, AZ.
Jackson purchased a

11 minutes ago from Austin, TX.
Aiden purchased a

2 minutes ago from Los Angeles, CA.
Ava purchased a

11 minutes ago from Cheyenne, WY.
Liam purchased a

11 minutes ago from Atlanta, GA.
Mia purchased a

5 minutes ago from Portland, ME.
Lucas purchased a

18 minutes ago from Denver, CO.
Isabella purchased a

19 minutes ago from Hartford, CT.
Noah purchased a

5 minutes ago from Topeka, KS.
Zoe purchased a

10 minutes ago from Boston, MA.
Mason purchased a

15 minutes ago from St. Paul, MN.
Lily purchased a

8 minutes ago from San Diego, CA.
Ethan purchased a

7 minutes ago from Harrisburg, PA.
Caden purchased a

17 minutes ago from Albany, NY.
Logan purchased a

15 minutes ago from Santa Maria, CA.
Emily purchased a

18 minutes ago from Portland, OR.
Bryan purchased a

2 minutes ago from Boise, ID.
Nicholas purchased a

18 minutes ago from Phoenix, AZ.