I have had this fan for a few weeks and to this point I am very satisfied. I bought it to replace a Hunter fan that was still working after nearly 15 years - but its buzzing AC motor was driving me crazy.Pros:- absolutely silent DC motor- moves lots of air- clean, modern and compact canopy, motor housing and luminaire- bright light with very good dispersion- nice looking and highly functional wall control- ABS blades look better than expected and should hold up well in my humid location- iOS app is decent, responsive and seems to be actively developedBonus:- if you are tech savvy, local control with iOS Home app is possible via homebridgeCons:- since the canopy is compact, getting the receiver wires tucked in during installation was tricky- i had some network related setup issues with the iOS app but YMMV- not inexpensive (but the wall control almost makes up for it)Bottom line:Worth the extra $$ if you plan to use the smart features and prefer a sleek wall control over a clunky remote like you get with many DC motor ceiling fans. 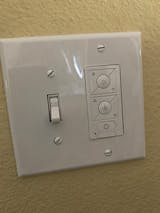 I purchased several Modern Forms ceiling fans from a local lighting showroom after reviewing the product specs on . I now have five Modern Forms fans. They work great. Excellent airflow and very bright. The light kit is made of a one-of-a-king acrylic that I've not seen on any other fan. They are quiet, app works well, and the wall control does too. 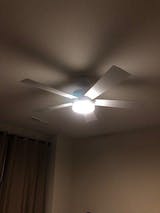 We were very surprised at how nice and fancy these look in person!! will by again if needed!!

Iâ€™m very happy with my purchase. Installation (replacing existing old fan) was easy and it worked right away with the app. I love that the lowest speed is just a slight air movement without feeling like itâ€™s blowing on you, and itâ€™s completely silent- perfect over my bed. At higher speeds I only hear air movement, not the motor.

Bought this to replace a 20 year old hunter fan. My requirements were for a modern looking fan, with bright LED lighting, quiet operation, smart features ( echo integration), and a wall switch. This fan checked off every single one of those criteria. It took me about 4 hours to install, because Iâ€™d never installed a ceiling fan before, and had trouble uninstalling the old Hunter fan, because I didnâ€™t know the model and had trouble finding an online manual. It was so old, that none of the hunter YouTube videos applied. Once I got it removed, I found that the 2.5â€ wide ceiling box was too narrow for this new fanâ€™s mounting bracket, so I had to run to the hardware store to buy a new 4â€ ceiling fan box, and then had to cut a larger drywall circle to accommodate it. Once this was done, the rest of the installation was pretty straightforward, except that the wires and safety wire that come with the fan are probably 6â€™ long, so I ended up having to cut them to get everything to fit inside the canopy cover. Because my ceiling fan box was only 0.5â€ deep, it didnâ€™t have enough room to store the excess wire. I also found one of the motor wires was mislabeled, but it was pretty obvious; someone not familiar with basic electrical wiring, however, could have run into a problem with that. Once everything was hooked up, I powered it up and it silently came to life. The motor does this sort of stuttered start, which Iâ€™ve learned is normal, since I bought a second fan from modern forms and it does the same thing. Not a big deal. Itâ€™s silent and the only thing you hear is the movement of air. And this fan really moves a lot of air! The other fan I bought is a 3 blade fan, and it moves a lot less, in comparison to this 5 blade fan.As for the light, itâ€™s great. Quite bright, and a very pleasing 3000k. The other fan I bought is 2700k, and just a tad warmer (yellower). I prefer this one. I also like the clear acrylic light cover on this one, which seems to let more light out than the frosted cover on the other. This light easily fills the bedroom itâ€™s installed in.The app and Alexa integration work perfectly for me. Iâ€™ve created a routine in my Alexa app, that allows me to turn both the fan and light on simultaneously, with one command, which is nice, since the wall switch requires you to turn them on separately.Regarding the wall switch, itâ€™s probably the weakest part of this kit. Itâ€™s not lit, so you canâ€™t see it in the dark (how hard would it have been to put some leds in it?), and as previously mentioned, you have to turn the light and the fan on and off separately. It also would be nice if it beeped when turning the light on and off, so you know youâ€™ve pressed the button. The fan speed buttons beep, so why couldnâ€™t all the buttons do the same? That said, itâ€™s still nice having an RF wall switch come with the fan, so these are minor nit picks.Overall, a great fan. Not perfect, but pretty darn close. Iâ€™ll round this one up to 5 stars!

10 minutes ago from Boise, ID.
Emma purchased a

2 minutes ago from Phoenix, AZ.
Jackson purchased a

18 minutes ago from Austin, TX.
Aiden purchased a

6 minutes ago from Los Angeles, CA.
Ava purchased a

10 minutes ago from Cheyenne, WY.
Liam purchased a

14 minutes ago from Atlanta, GA.
Mia purchased a

12 minutes ago from Portland, ME.
Lucas purchased a

8 minutes ago from Denver, CO.
Isabella purchased a

10 minutes ago from Hartford, CT.
Noah purchased a

6 minutes ago from Topeka, KS.
Zoe purchased a

10 minutes ago from Boston, MA.
Mason purchased a

2 minutes ago from St. Paul, MN.
Lily purchased a

12 minutes ago from San Diego, CA.
Ethan purchased a

4 minutes ago from Harrisburg, PA.
Caden purchased a

11 minutes ago from Albany, NY.
Logan purchased a

6 minutes ago from Santa Maria, CA.
Emily purchased a

10 minutes ago from Portland, OR.
Bryan purchased a

19 minutes ago from Boise, ID.
Nicholas purchased a

13 minutes ago from Phoenix, AZ.