We've heard nothing but good things from friends and family who have Roombas, so we thought we'd give it a try. The first thing we were told was, "Make sure you spend the money for the real thing: the others may be a lot cheaper, but they're headaches waiting to happen." Okay, fine, but the 675 isn't exactly a bank breaker, especially if you get it during a sale. And if we just made our lives easier AND avoided l'agita for less than $250, that's even better.I don't care about packaging until it's inadequate or off-the-charts excessive, and neither was the case here.The setup was breathtakingly simple - I forgot to breathe for a few seconds when I looked at the unit in the charger and after installing/starting the app, pressing 2 buttons, and naming the robot ("Sucka" - I know, that's so original), I saw that my phone was reporting that setup was complete. I thought, "Really, that's it? What'd I miss?" As it turns out, I missed nothing. Easy-peasy. So, I thought I'd just let it charge overnight and then I'd play with it the next day.The next day, while working in my home office, I started the app and selected "Vacuum Everywhere". I heard it wake up with cheerful little beeps and start working. It really isn't too loud, so between meetings I followed the sound, coffee in hand, to watch it work. I was kind of fun to watch it careening around like a drunken toddler, gently crashing into stuff and bouncing counter-clockwise until it could move again. I half-expected it to exclaim, "Uh-oh!" And if something was light enough, it just pushed it around until it hit something solid enough to make it bounce. I wish I'd waited until after working hours so that I could watch it with an adult beverage or two. The 14-year-old in me is definitely going to set up some obstacle tests.Like any toddler, it requires a little bit of supervision. It got stuck on a thick power cable beneath a bed, so it beeped, called out with a voice to ask for help, and alerted my phone app; I rescued it and sent it on its way. (Note to 14-yr-old-self: see if there's a way to hack the firmware to change the voice alerts to something really wrong. Maybe a toddler-like voice yelling, "Aw, s**t!" or "FML!")Also like a toddler, it eventually needs a diaper change and a feeding/nap. After a while, I had to empty the dust bin and pull some hair off of the brushes and wheels, so I put it back on the charger for a bit. So, it's napping right now. After lunch, I'll fire it up again and see if it finds its way into my office.It may need some decoration, too. Maybe some googly-eyes and a rude bumper sticker? Or a tiny pirate flag flying from the rear?So, for the important part: does it clean well?Yes. Judging from look of the floors and the amount of crud in the dustbin, it does a solid job. And, apparently, I don't: my weekly floor sweeping/Bona mopping appears to be missing some stuff.Ah, the app tells me that it's already back to full charge (just under 2 hours!), so I'm gonna turn Sucka loose again.

I work 2 jobs and my husband none. He used to do the housework but has slacked. I don't want to vacuum when I get home so this is great...especially with a dog in the house.

The device is awesome. It is a little wonky seeing it move about the house and our dogs are terrified but it works great on the hair but for carpet and hardwood. Only issue is the app is not the best, but you can run it without the app.

P
Pilar F
Does the job when I don't have the time.

Love this Roomba! Took me a while to decide to get this, so when it was on sale, I jumped in. It does what it says - vacuum. I don't have time during the day to vacuum and on weekends I do other things so the last thing I want to do is vacuum the whole house. It takes 'Robbie', yes, I named him, 90 minutes to do a estimated 1100 sq. ft., not counting the bedrooms or bathrooms. Hallways, family room, kitchen, and dining area is what I need for him to concentrate on, as I have 2 little dogs - pom and shitzu mix - so their furry balls need sweeping up. Toys and cords need to be out of the way and dining chairs pulled out to give Robbie space to do his thing and my floors are clean.

I was so impressed with this machine - easy to setup and use and it went right to work. I have a kitty that sheds black hair everywhere... and I am a papercrafter, so forever making a mess with scraps in my work area... and I don't like to lug out the heavy vacuum... this machine took care of the cat hair and the paper scraps and even docks itself when done! Has it's own easy app, but also works with Alexa, so I am very happy! 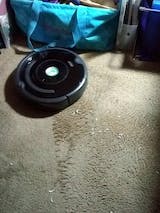 6 minutes ago from Boise, ID.
Emma purchased a

9 minutes ago from Phoenix, AZ.
Jackson purchased a

6 minutes ago from Austin, TX.
Aiden purchased a

9 minutes ago from Los Angeles, CA.
Ava purchased a

9 minutes ago from Cheyenne, WY.
Liam purchased a

6 minutes ago from Atlanta, GA.
Mia purchased a

10 minutes ago from Portland, ME.
Lucas purchased a

14 minutes ago from Denver, CO.
Isabella purchased a

17 minutes ago from Hartford, CT.
Noah purchased a

13 minutes ago from Topeka, KS.
Zoe purchased a

13 minutes ago from Boston, MA.
Mason purchased a

9 minutes ago from St. Paul, MN.
Lily purchased a

2 minutes ago from San Diego, CA.
Ethan purchased a

9 minutes ago from Harrisburg, PA.
Caden purchased a

5 minutes ago from Albany, NY.
Logan purchased a

10 minutes ago from Santa Maria, CA.
Emily purchased a

11 minutes ago from Portland, OR.
Bryan purchased a

4 minutes ago from Boise, ID.
Nicholas purchased a

3 minutes ago from Phoenix, AZ.